Abstract: in this post I discuss clustering: techniques that form this method and some peculiarities of using clustering in practice. This post continues previous one about the OPERA.

Update: now you can play with a 3-dimensional visualization of clustering.

What is clustering and when it is needed?

Clustering is a typical problem of unsupervised machine learning. Given a set of objects (also called observations), split them into groups (called clusters) so that objects in each group are more similar to each other than to observations from other groups.

Clustering may become the right tool to identify structure of the data. For instance, cluster analysis helped in 1998 to identify that gamma ray bursts are falling quite nicely in three groups (clusters), not two as was thought before. So we got a hint that there are three types of processes in far galaxies which result in energetic explosions. Now properties of each group can be analyzed individually and we can try to guess processes behind each type of bursts.

Finding groups of users / customers / orders with clustering may turn out to be a good idea (and it may not, there are many factors).

K-means clustering (wiki) is probably the simplest approach to clustering data. The number of clusters $k$ is predefined, and each cluster is described by its center (mean). Algorithm starts from randomly defined positions of cluster centers, and iteratively refine their positions by repeating the following two steps

You can track the described training process in the following animation:

Example of clustering with k-means algorithm. Points are observation to be clustered. Example dataset consists of 7 close clusters (circles). Each cluster is shown with its own color, cluster centers are shown with big circles. Process converges to a local minimum after several iterations (note that nothing changes on last iterations). This is a screen capture of a demonstration by Naftali Harris.

However this simple algorithm in many cases fails to provide good clustering:

There is a fundamental limitation which prevents k-means from properly clustering above example: k-means clusters are convex polytopes (you can notice this from both demonstrations, but it can be proven quite easily). Moreover, k-means clustering partitions the space into so-called Voronoi diagram.

There are more sophisticated approaches to clustering which overcome these limitations of k-means to some extend. One of such methods is DBSCAN (Density-based spatial clustering of applications with noise), which is also quite popular.

The following animation gives some vague understanding about procedure behind DBSCAN clustering:

This way DBSCAN is capable of finding complex clusters, quite different in shapes and sizes, but the clusters don't have any parametric description as in other methods (for instance, in k-means cluster is modeled by its center position).

DBSCAN also handles outliers, i.e. observations that do not seem to belong to any clusters. In the clustering of OPERA basetracks that I discuss below it is quite important, as many noise tracks present in the data.

Visual comparison of algorithms in scikit-learn 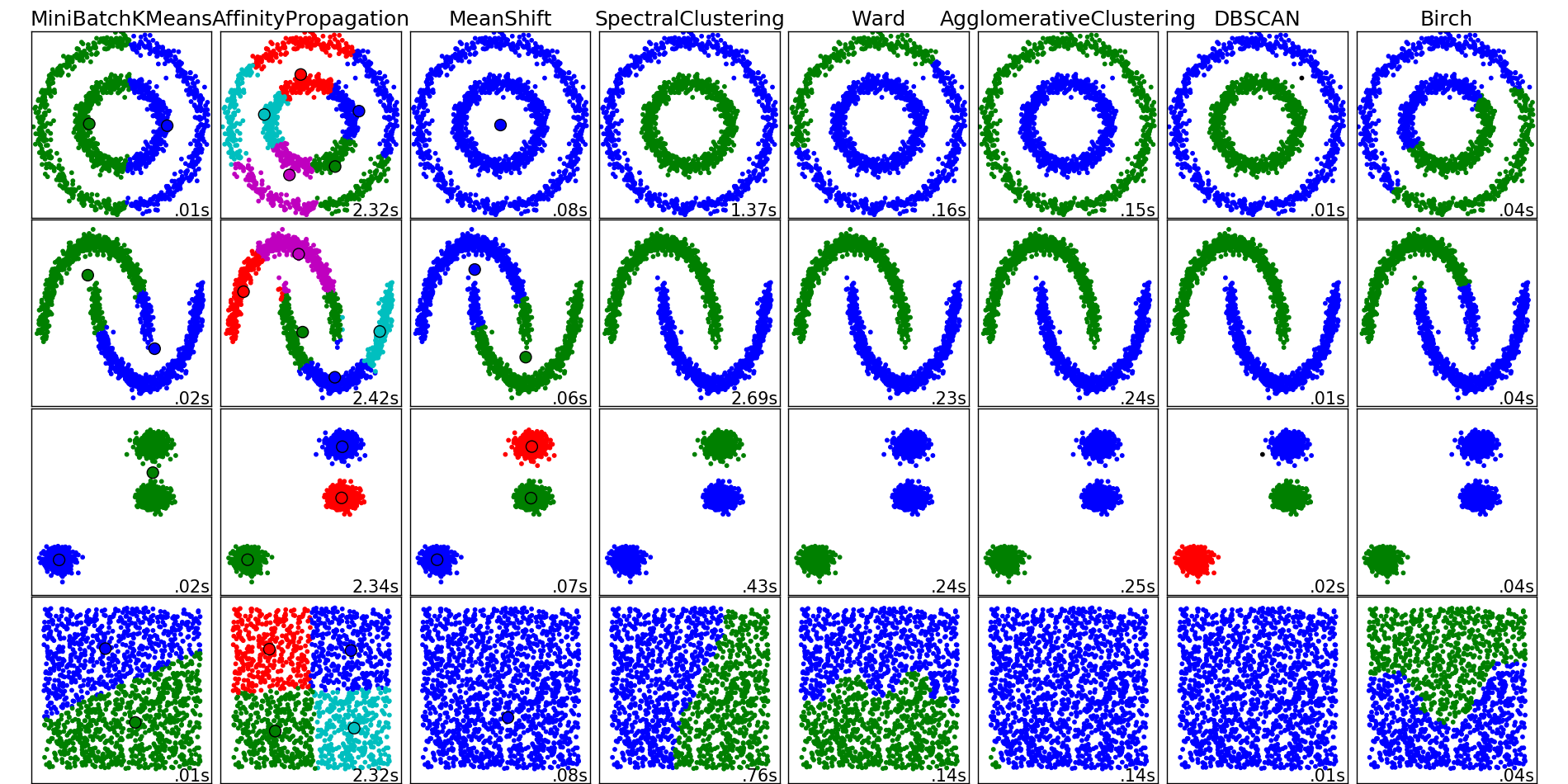 Please refer to that documentation page when in trouble and need to choose the right clustering method for a particular problem.

Back to the OPERA example

Let's now get back to the problem at hand. In the previous post we started from the situation when a brick from the OPERA experiment is developed and scanned. Scanning procedure outputs millions of basetrack, most of which are instrumental background and should be removed.

As it was discussed in the previous post, we can clear background and leave only several thousands of tracks thanks to classification techniques and proper feature engineering. 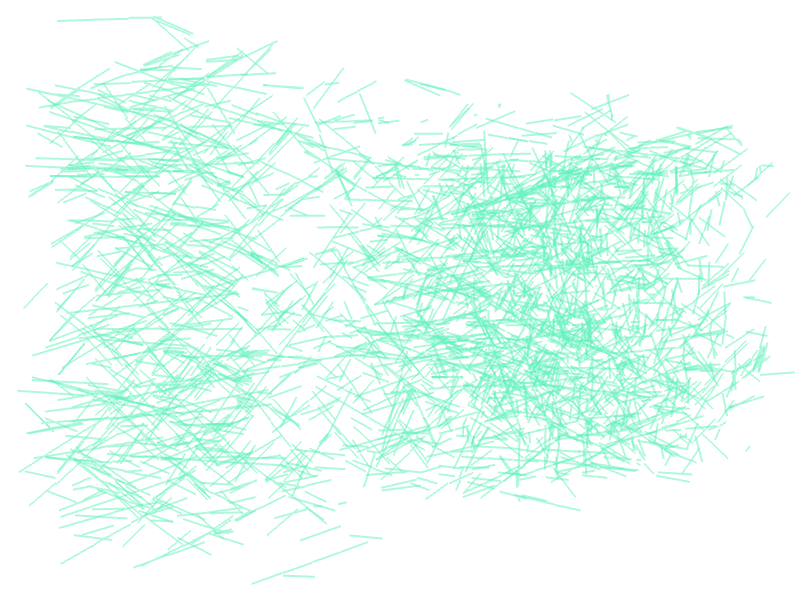 Now we have several thousands tracks and the goal is to find patterns in this data.

Importance of distance choice in applications

Important detail that I want to dwell upon in this post is how do we measure distance between tracks (also called metric function or simply metric). Clustering techniques are unsupervised, and it sounds like they get useful information out of nowhere. Unfortunately, there are no miracles: information is obtained from the structure and provided metric function, which makes it possible to find similarity between items or observations.

Let's see this in example: what if we simply take euclidean distance and apply DBSCAN clustering? (in this approach we treat each track as a point in 3-dimensional space defined by its position) 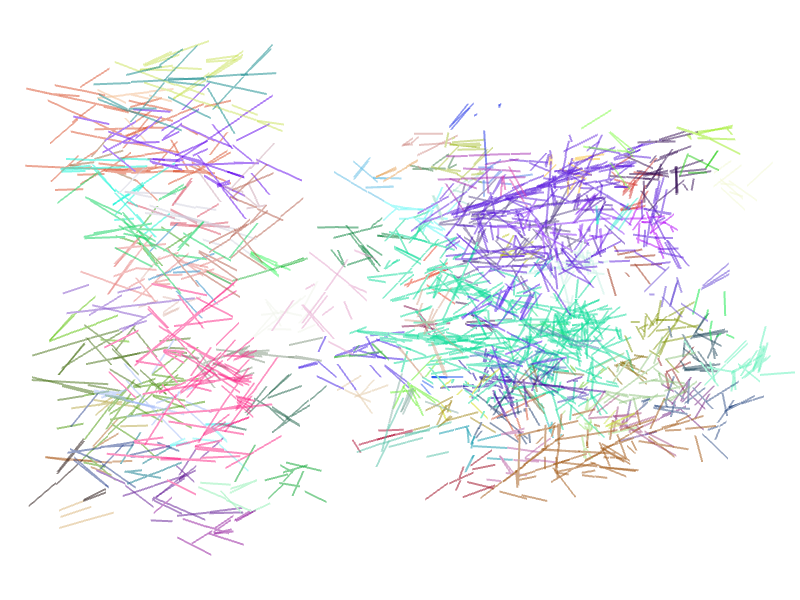 The result is disappointing: found clusters do not correspond to any tracks, those are just groups of tracks placed nearby. An algorithm had no chance to reveal anything useful given the way we defined similarity between tracks. You can see from the scheme below that closest basetracks in euclidean distance rarely belong to the same pattern, while basetracks left by same particle can be quite far from each other: 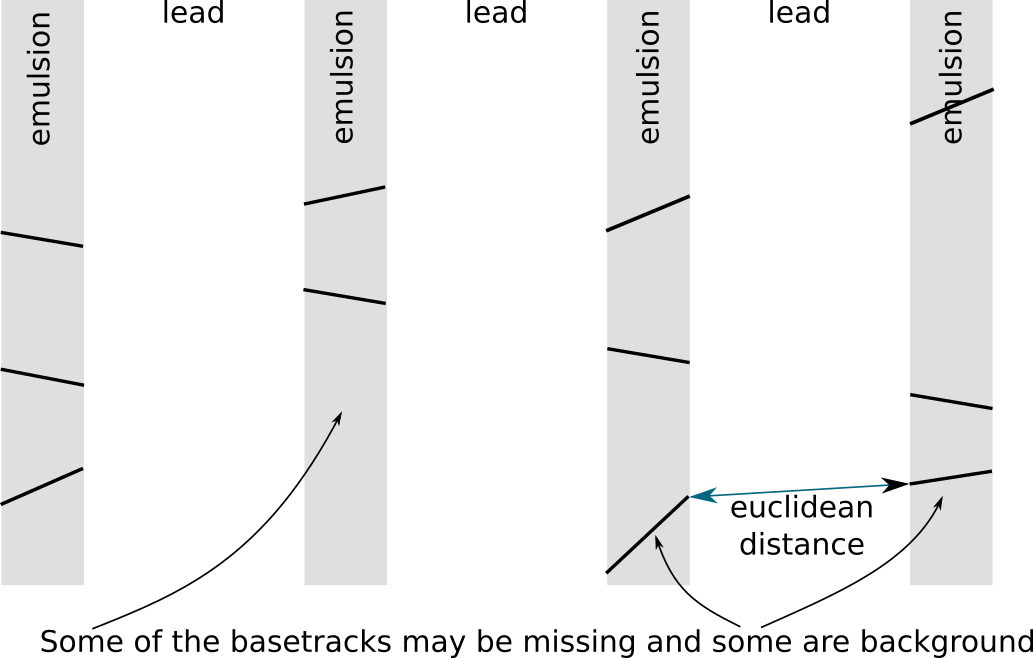 Our clustering should be stable to appearance of noise in the data, in particular noise basetracks that were left in the data should not be attributed to any cluster and marked by algorithm as outliers (DBSCAN handles this situation as was shown in animation).

Another problem in the data is missing links (as shown in the scheme above), when one of the basetracks is missing and algorithm should still consider two parts to the right and to the left as a single pattern. It is problematic, because parts are spaced apart.

Accounting for directions of basetracks 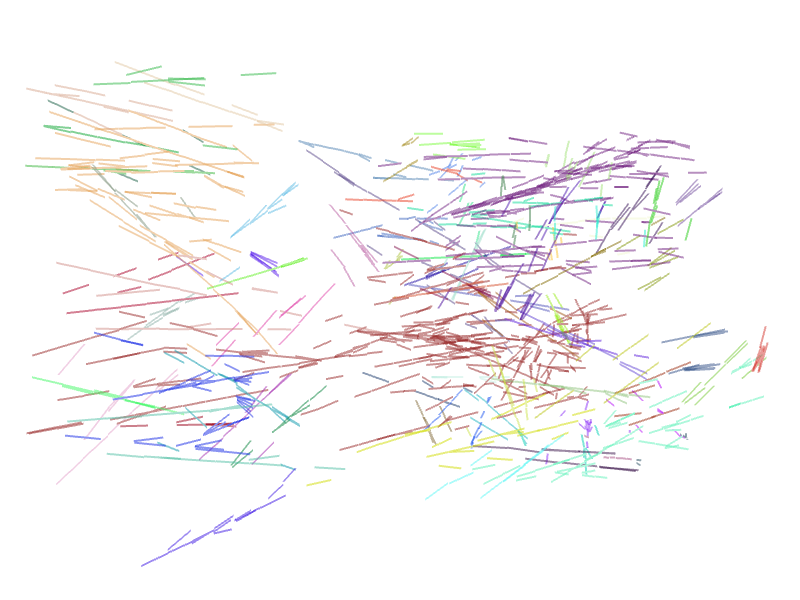 The clustering became much more informative: clearly, one can see now parts of the tracks, however most of the groups include more than one track, and some of the outlier basetracks are included in clusters erroneously. 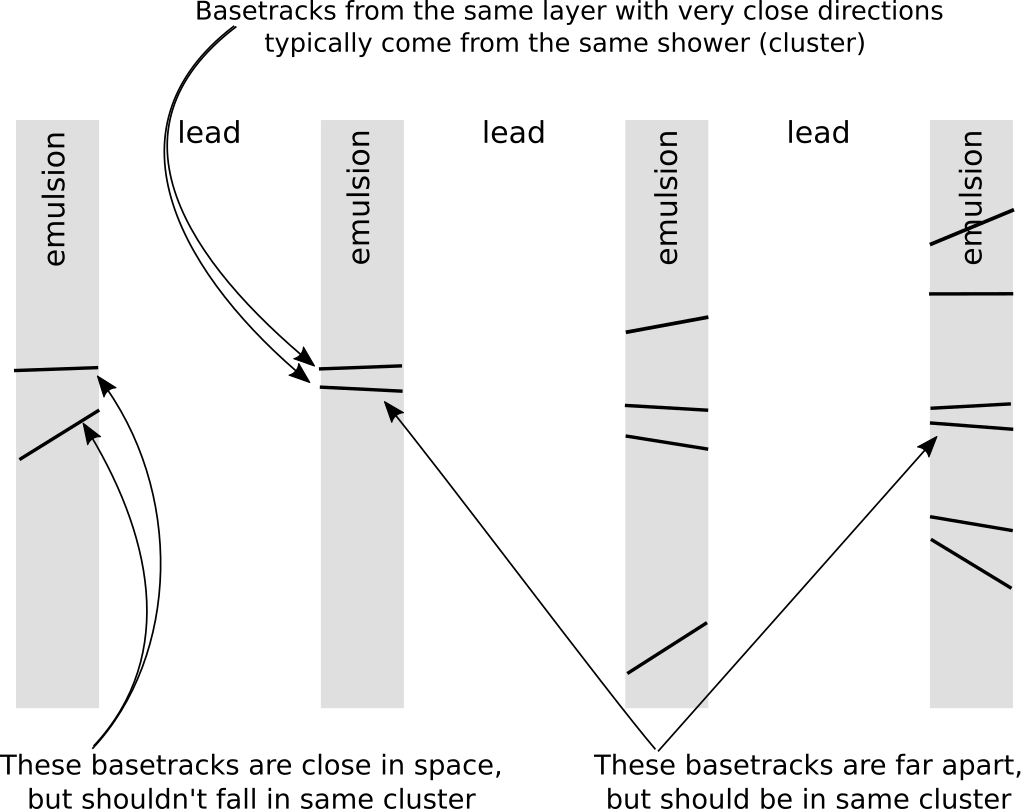 Still, there is some major problem with our distance, in particular, the basetracks can be far from each other in euclidean distance and still (quite obviously) belong to a single track or shower. Metric functions used so far require that 'similar' tracks should be close in euclidean distance, and thus lost base tracks are a problem. 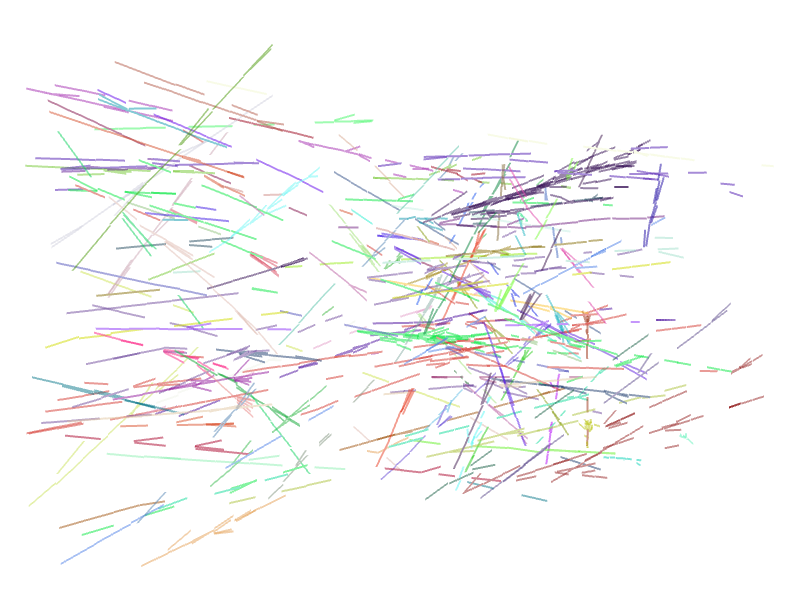 Some of the found clusters are shown in details below, you can notice that it was able to reconstruct the cluster well even when significant part of the shower is missing in the data (dark blue cluster of two parts is a single shower) or when tracks left by particles have missing basetracks in the middle 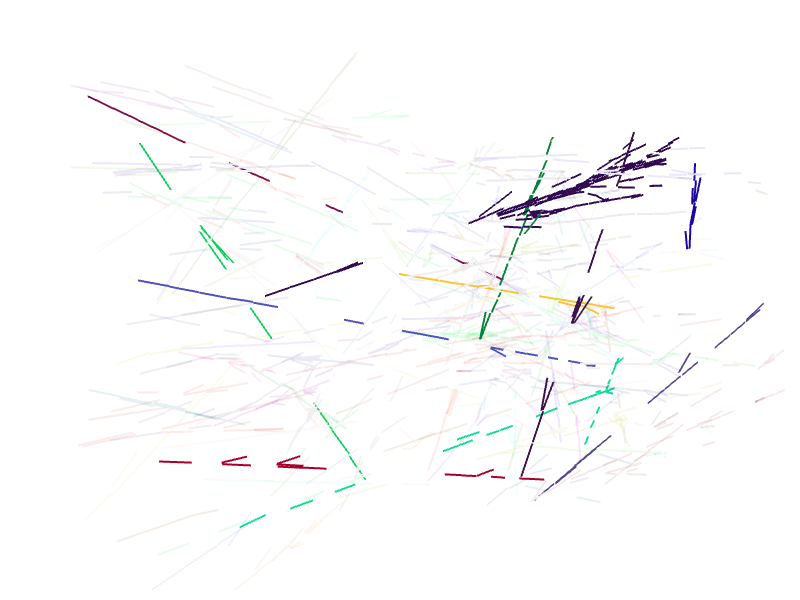 When data analysis approach you use relies on distance (that's almost all the clustering algorithms, but also neighbours-based methods and KDE), be sure to choose distance function wisely (using your prior knowledge about the problem), because this affects result very significantly.