Reliable comparison of models is a question important for DL “theorists” (to evaluate new approaches) as well as for practitioners/engineers (to select an approach for a particular task in hand). Comparison is time-consuming process, frequently with noisy results.

Usual setting incorporates fixed dataset split into train/val/test and fixed metric of choice. Next, independent runs are conducted for all models under comparison and achieved quality is registered.

What is suggested: twin training

Models can be trained side-by-side within the same process, with as high similarity in the training process as possible. Same batches, same augmentations, and of course the same datasets.

There are three models trained in parallel in this screenshot from tensorboard. One can tell when one of models has lower loss and estimate level of ‘noise’. It is also clear that most jumps and falls in learning curves are due to batches sampled, and are not model-specific behavior. In other words, you can better see the difference between models not difference between runs.

This demonstrates a typical comparison — things compared are extremely similar and there is little practical difference. Models’ response to the same training input is close to identical. It’s not easy to get the same conclusion by looking at just final scores. That’s a good argument towards including learning curves in the paper.

When training models for image segmentation (such as instance segmentation or class-segmentation), lack of memory becomes a critical factor. Batch sizes become very small, and it is almost impossible to train several segmentation models at once on a single GPU.

During segmentation training each sample contributes a lot, since it provides a lot of labels (one per pixel!).
It is also unlikely that you have thousands of well-labelled high-resolution segmentation images.

However when you train several models inside a single script/notebook, there are no such problems, because you never keep intermediate activations for more than one model at a time. Weights of all models should still be kept in (GPU) memory, but that’s a small fraction of space taken by activations. 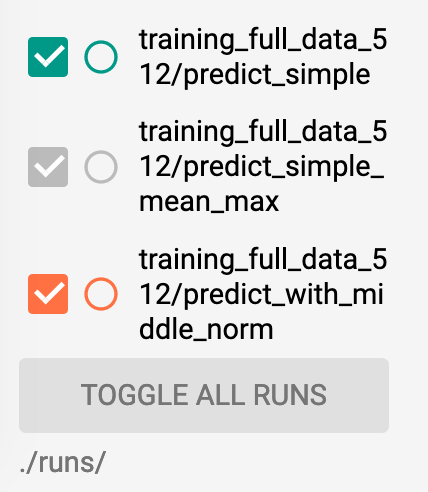 Tensorboard recursively scans subfolders for logs, so you can keep each ‘comparison’ in a separate folder, and each compared option saves its logs to a corresponding subfolder.

I don’t think that fixed random seed is reliable enough to be considered as an alternative way to achieve similarity in training.

THere are many different RNGs provided by different modules, and RNGs are used in too many places. And you need to precisely control RNG flow in your program. Because if some of your functions use global RNGs like random or np.random directly, this implies that any side call to those from anywhere in your program completely changes all following sampled numbers. Any ‘interruption’ in the sequence breaks it. Random numbers on GPU is whole another story.

So, you should look through all the augmentations, samplers, dropouts (basically, everything) to verify they don’t use global RNG’s (and find that some of them actually do).

Long story short, if you have to rely on random seeds in DL, at least log some control sums to verify that sequence was not broken by an unexpected call from somewhere else.

You can still use random seed to achieve reproducible training of the same model.